Welcome to the Clementine summer newsletter.

We are looking forward to getting back on stage in the coming days.  It has been a prolonged absence by our standards – not played a show in almost 2 months (Thornton Hough Village Club in April – what a great night that was. Thanks to all who came.)

On Tuesday June 19th we will be joining Carlene Carter for her only UK show this year. Carlene is country music royalty and we are are happy to be the court jesters for the night. 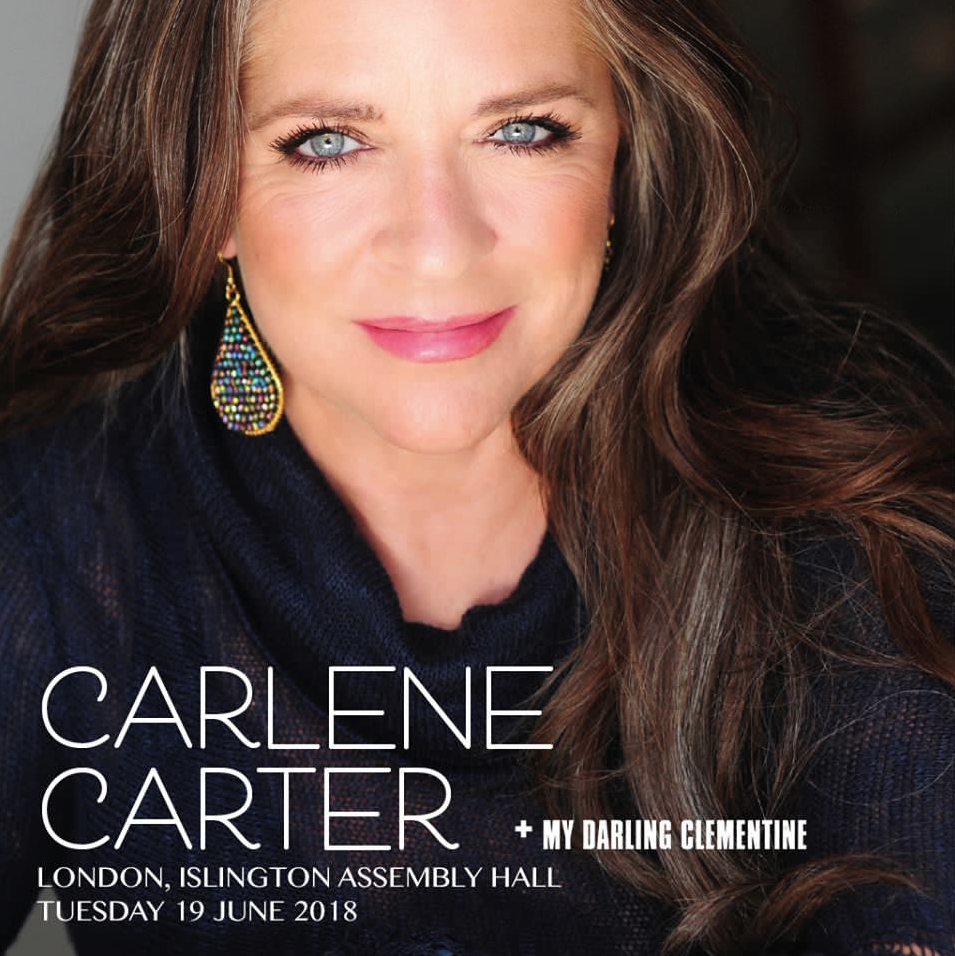 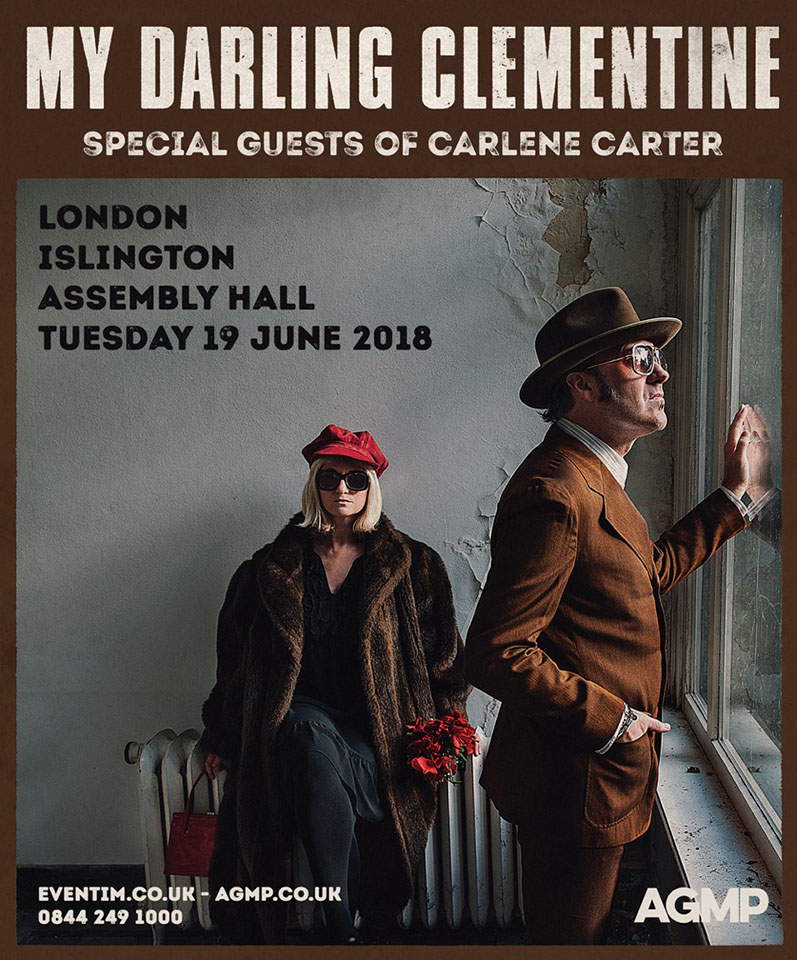 After that we will be in Norway, firstly at the Vise Festival in Egersund at the start of July (joined by Al Gare and Alan Cook) and then again, with the full band, at Seljord Festival:

Tickets are also now on sale for the Autumn tour.  These dates are a mix of duo, 4 piece and full band shows. We are also joining up with Mark Billingham again,  for a performance of The Other Half in Whitby.

If possible, PLEASE book your tickets as soon as you can if your are planning on coming to any the shows. It really makes a huge difference and helps re-assure promoters. Leaving until the last minute to buy can sometimes lead to promoters getting cold feet and wanting to cancel if advance sales are low.

We’ve also got some more dates in the Netherlands lined up:

Our thoughts are turning to getting back in the studio soon, and writing some new songs. A week spent at the first ever South Louisiana Songwriter festival and Workshop for Michael  (hosted by the incredible Buddy Holly Educational Foundation) got the creative juices flowing and resulted in some new songs and co-writes.Read more about this event and see some concert footage of some of the outstanding writers / performers involved at https://www.solosongwriters.com/about-1/Although we have not yet committed anything to tape for a new album, we do want to let you know about 2 releases coming soon that we are involved in and for causes we are delighted to support;

1. In March we joined a number of fellow musicians to contribute vocals to a new version of Lou Reed’s Perfect Day.

The new arrangement having been done by Steve Nieve. This single is due for realise in the coming weeks, along with an accompanying video.This will be followed by the release of a triple album featuring over 40 artists,  and a concert in London, with all proceeds going towards Mental Health awareness.

More details at http://www.music-minds.co.uk and tickets for the October concert are available here.

2. Following our recent tour of Spain in January we were invited to contribute a song to an album that highlights the on-going plight of the people of Western SaharaThe song to be featured is not an MDC song but a remixed version of a song called  In Time, which originally appeared on Michaels 2010 solo album I Didn’t Raise My Boy To Be A Soldier.

This album will come out in July and features, amidst others Malcolm Holcombe, David Olney, Eleni Mandel and many more (see below).

More details to follow soon on actual album release date and where copies can be bought. 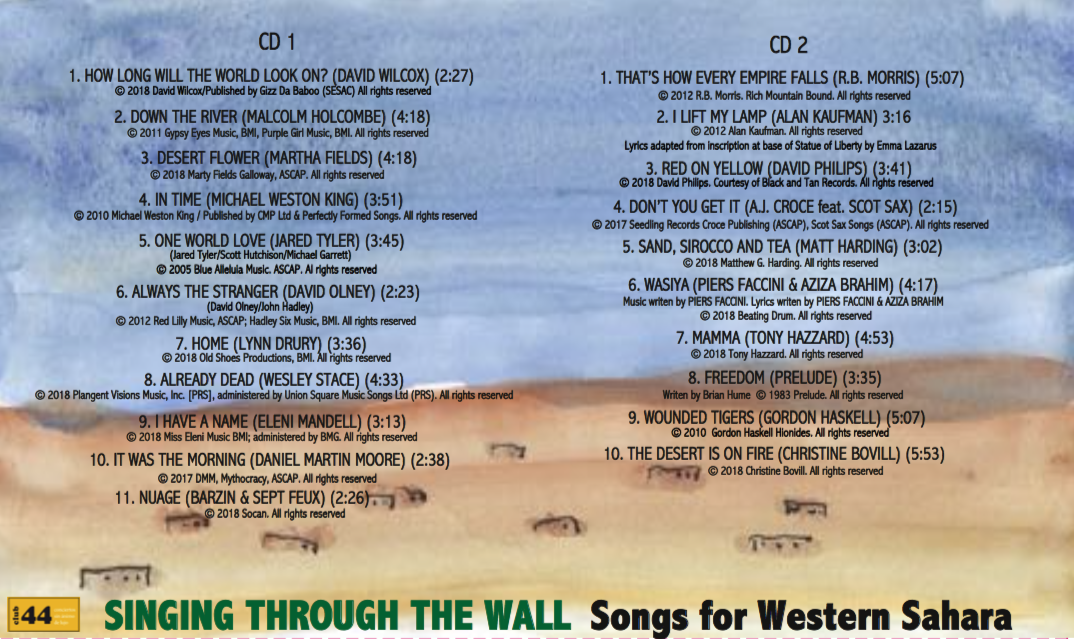 We love hearing from you, so please get back to us if there is anywhere you want to see us come and play.Also if anything you would like to see appear in the store. We have been meaning to get new T. shirts printed for a while now. Any takers??  And if so, what do want to see on them?We also have reduced a number of items in the MDC store, so please take a look and grab a bargain.

We have just a few of the Jacknife screen print posters left. We want them hanging on someones wall not sitting in our store cupboard so please order now! 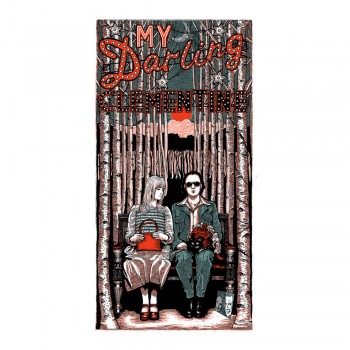 We also now have some vinyl copies of How Do You Plead? and The Reconciliation back in stock, though we are down to the last box of each. 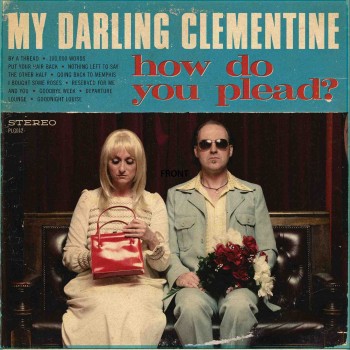 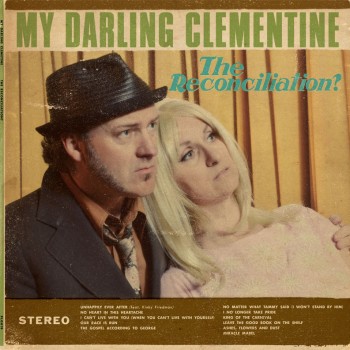 That’s all for now. Thanks everyone. Keep in touch and we will see you soon. Have a great summer.Yours,
Lou and Michael

Just announced, Michael and Lou will be joining Carlene Carter (for her only UK appearance) in London in June.

Tickets are on sale now!

A March Update from MDC

Hope you are all doing well, and saying farewell to winter.

This performance of Yours Is The Cross i Still Bear was filmed post sound-check in Bilbao, back in January. It was the first night of the Spanish tour and it was raining cats and dogs outside. So we stayed in, by the bar.

Thanks to Edu and Txuma at Twobaskos for shooting this and their red light inspiration. Enjoy and share.

When were over in Belfast recently to play The Belfast- Nashville Songwriter Festival we called into see our dear friend, and one of the finest DJ’s anywhere, Mr. Ralph Mclean. You can hear us in session, in conversation and in cahoots with him on his show, Mcleans Country on BBC Radio Ulster via I-player until April 20th. Listen to the whole show. He always has an immaculate playlist.

On April 15th, we will be co-hosting On The Beat with another friend of the band, Spencer Leigh on BBC Radio Merseyside.

Will also be playing live, so tune in if you can on the night. We are picking the tunes!

Keep an eye on the gig pages. We are not really touring just now but we are out and about, here and there, off the beaten tracks, so come and find us.

Happy New Year everyone  – lets indeed ‘hope it is a good one without any tears,’  Well, less than last year at any rate.
We hope you had a cool Yule and that Still Testifying found it’s was onto your hi-fi over the festive season.Here is what is coming up in the early part of the MDC year.

Busy start to the new year in terms of touring. Spain, Holland, Belgium and shows here at home.

All of these will be duo shows.

We are also re-uniting with Mr. Mark Billingham for 3 performances of The Other Half*

Details of all shows, more info about who is appearing with us, and how to get tickets can be found here.

Some of the UK shows are part of the UK Rural touring Network (they are the ones in places you wont have heard of!) but these are great nights, in very intimate and interesting venues, hosted by wonderful people, so do come along, even if it is a bit of a step into the unknown.

We have been delighted with the ongoing reaction to the album. Great reviews continue to come in, even in November and December and it also made many “Best of 2017” year-end lists.

No Depression, RnR, Country Music People, Country Music Magazine, 3rd Coast Music – Texas, Three Chords and The Truth, Say It With Garage Flowers, are just some of the publications to put Still Testifying in their albums and songs of the year.

In the last 2-3 months also a number of interviews / articles ran in the press, maybe you saw them in magazines such as Country Music Magazine, RnR and Country Music People in the Uk, and various others in Holland, Germany and Scandinavia? Friends in Spain and Holland look out for Ruta 66 and Heaven magazine this month.

Here is an interview with Michael for the American magazine Goldmine discussing earliest influences; 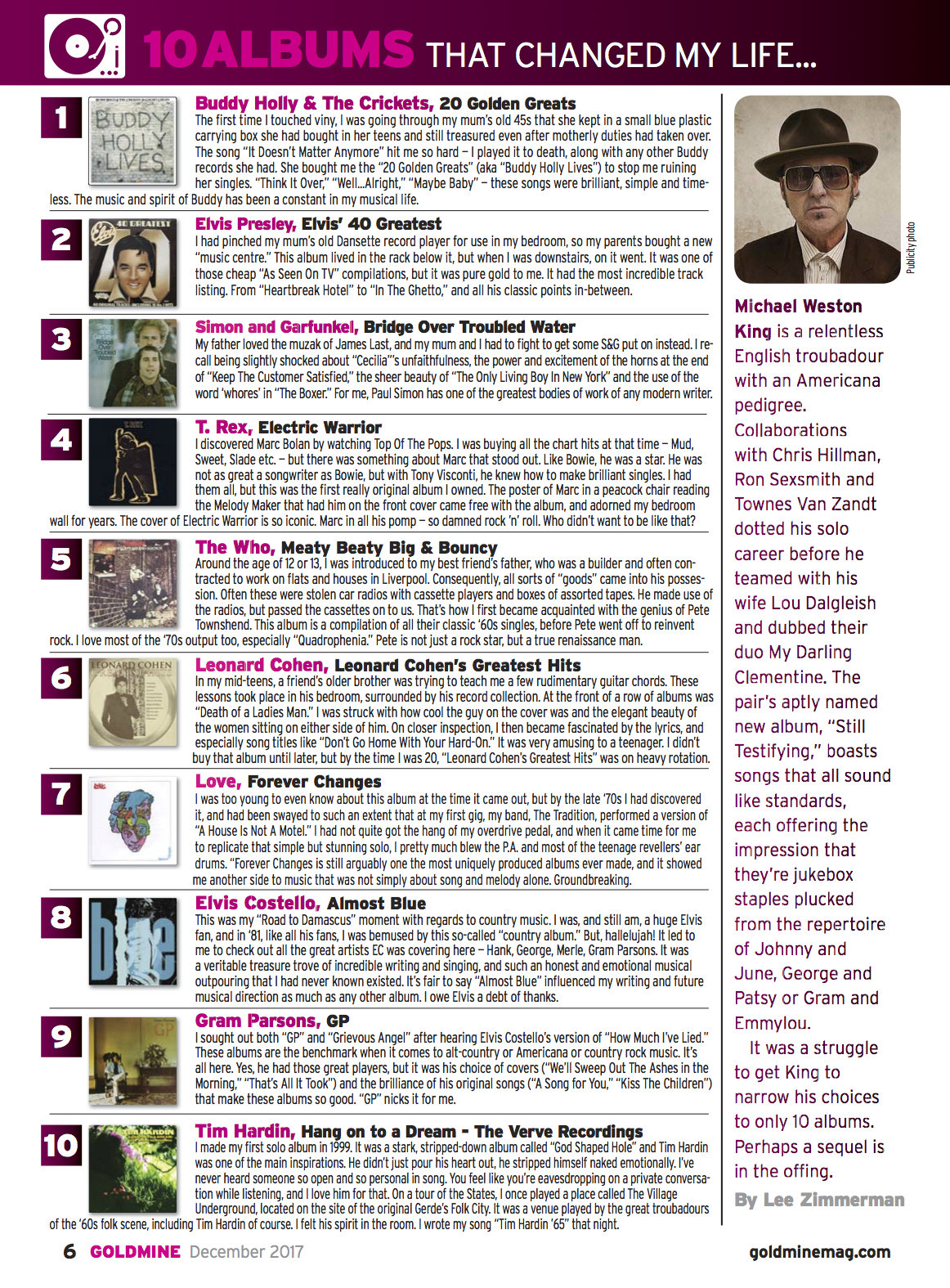 Both recorded for Bob Harris’s Under The Apple Tree sessions and his Whisperingbobtv channel.

The first clip features Al Gare on bass, Ian Sloan on pedal steel and one Mabel Dalgleish-King on recorder. Yes, we are keeping it in the family.

My Darling Clementine – ‘King Of The Carnival’ | UNDER THE APPLE TREE

If you have not seen these already, please tale look, a listen and do share. Thanks. 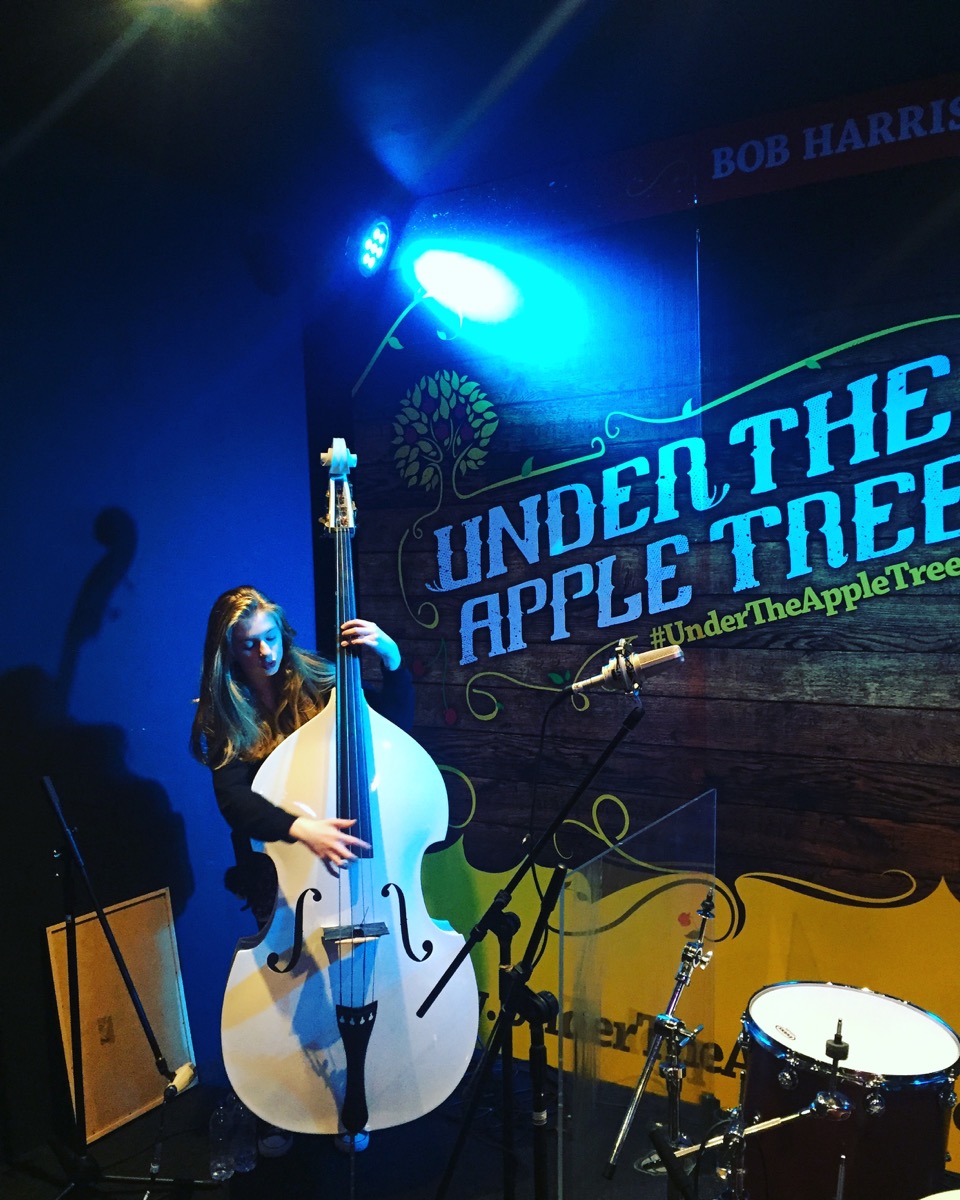 Recorded in Albuquerque, New Mexico in 2013, while promoting The Reconciliation, our interview and live session for “Art of the Song” is being  re-aired this week, January 8-14. You can listen either on the Standing ‘O’ homepage with a subscription or by signing up for a free 10-day, no credit card required trial. You can also listen to the show on one of the Art of the Song stations, or on the Art of the Song website from January 15-21.

We were obsessed with the TV show Breaking Bad at the time, so this was something of a pilgrimage. 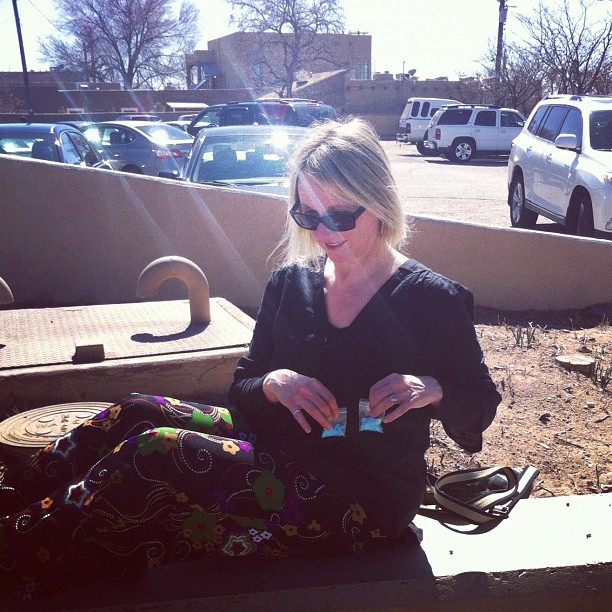 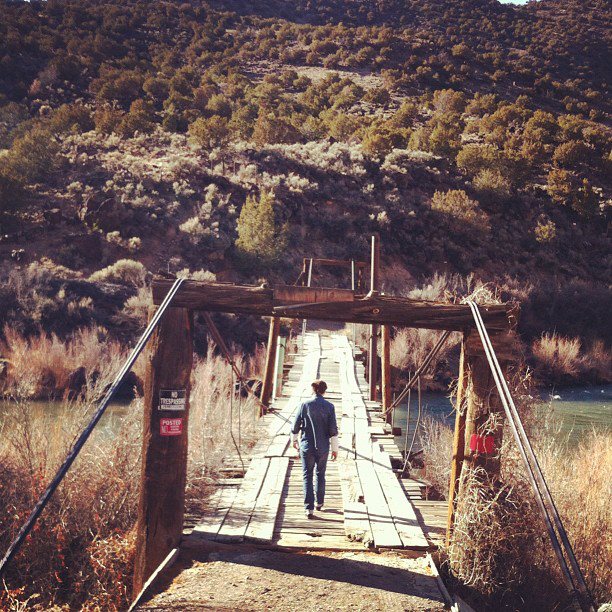 There are no immediate plans  for us to return to the studio in the coming months but plans for a live album are being put into place. More on that to follow.

There a 3 upcoming compilation albums we are delighted to be part of – all fund raiser / awareness raisers for different causes.  As and when we have more news on release dates we will let you know. Some fine artists also involved in these projects too.

If there are specific recordings you would like us to do personally for you – maybe a song written especially, or a cover song that would love to hear us do, then do get in touch via the web site. Any proceeds from such requests will go towards future new recordings.

ON A SAD NOTE

We were very saddened to hear about the death of of the great Ivan Beavis over Christmas. A huge fan My Darling Clementine and a much appreciated sponsor and believer in our work over the past few years.

He was also a huge supporter and fundraiser for The Morning Star newspaper and it was Ivan who asked Michael to curate the album We’re All In It Together. If you don’t already this really wonderful double, compilation album, then do go buy a copy now. You won’t be disappointed. 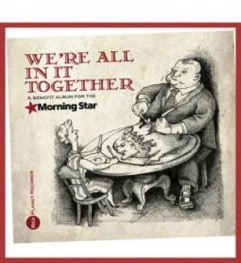 You can read a little more on Ivan here.

He will be sorely missed.

OK, that all the news that is fit to print for now. and as we always say, do stay in touch, especially via Facebook or Twitter for more immediate updates, news, new videos, and newly announced shows;
The Official Facebook page | My Darling Clementine on Twitter

Good luck everyone for the new year and we look forward to seeing you at show in the near future.

Peace, Love and Understanding to you all.

Free Art Print when you spend £20!

As we enter the season of goodwill, we are getting into the festive spirit. For a short period of time only, we are offering a FREE My Darling Clementine limited edition, signed, art-print to anyone spending over £20 in the MDC store. This offer will end January 1st. Happy Christmas (shopping) folks!